You might not have seen the news, but the Commerce Department revised its GDP numbers for the second quarter of 2008, and the revised numbers say that the real economy grew at a 3.3% rate. These new numbers should drop the fears of recession, but the story is so ingrained in the media that it probably will not.

It has, however, dropped the value of the bet on recession on the intrade prediction market. In early 2008, the market said that the probability of a recession in 2008 was almost 80%. It is now down to less than 20%. The bid and ask prices are far apart, at 10 and 17, so it does not appear that there is much trading.

I do not remember where it was, but I read recently that the reason that the economic problems were getting so much publicity was that it was affecting the financial economists, the big money guys on Wall Street. Perhaps. I have not really seen any evidence of slowdown in this part of rural Indiana. We did not have a housing bubble, so there was no bubble to burst. The construction industry seems to be doing OK. The effect of gas prices, though, was noticeable. There were fewer cars (but probably not trucks) on the highways and interstates, and there were more scooters, bikes, and motorcycles on the roads this summer, and a lot fewer RVs. But those were the results of high gas prices, not recession.
Posted by Dessert Survivor at 9:04 AM No comments:

A negative side effect of the Pill

(In the traditional exposition of the logic of choice, we think of the individual carefully weighing costs and benefits to arrive at a decision. Of course we rarely do that. This article suggests that rational decisions, those that best get us to our goals, do not need to be made consciously.)
Posted by Dessert Survivor at 8:03 PM No comments:

Art in the Alley

This post has been moved to http://rensselaeradventures.blogspot.com/2008/09/art-in-alley.html
Posted by Dessert Survivor at 8:06 PM No comments:

A few weeks ago I wrote about the five banks and two payday loan places that Rensselaer has. I noticed the other day that I had missed a payday loan place. It is in our older strip mall, down the way from the Smoke Shop and between the two places that rent appliances to people. I guess I was just careless. 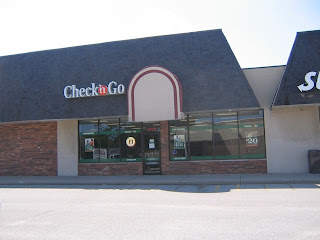 Rensselaer has some very interesting businesses. If I find some time, I will write about some of them in future posts.
Posted by Dessert Survivor at 3:48 PM No comments:

This post is now at http://rensselaeradventures.blogspot.com/2008/09/footbridge-part-1.html
Posted by Dessert Survivor at 7:45 PM No comments:

A Waste of Time?

Is college a waste of time? Charles Murray thinks so.
Posted by Dessert Survivor at 2:59 PM No comments:

This post is now at http://rensselaeradventures.blogspot.com/2008/09/busy-tuesday-night.html
Posted by Dessert Survivor at 7:00 PM No comments:

I have seen a couple of articles on this subject, and it does raise a number of interesting questions about what makes something ethical or unethical, or what should be criminal. Dog fighting raises some of the same issues. The Norwegians certainly are not Puritanical about sex, but they do not seem to all that happy about it, either.

(A little elaboration: A crime seems to demand a victim, someone who is harmed. In the case of either animal bordellos or dog fighting, there are at least four possibilities. (I think at one time I could think of five, but I do not now remember what that fifth one was.)
1. The person doing the action is harmed. This is an Aristotelian argument that some actions deform or coarsen us, making us less than what we should be.
2. The animal is the victim. This is the animal-rights argument, that animal preferences should matter, as do human preferences. There are some philosophers who want to give at least some animals the same rights as humans. How far do you want to push this argument? Should I kill the mosquito that is biting me? Should I worry that driving a car often kills small animals and huge numbers of insects?
3. Third parties are injured. One possibility is that we do not want as neighbors those who are coarsened by mistreating animals. It makes the entire society less desirable in which to live. Another possibility is that just the knowledge that people are having sex with animals or having dogs fight is very upsetting, and thus it causes harm to those who are upset. Both of these are externality arguments and many or most economists would find some variant of them more persuasive than either 1 or 2.
What do you think?)
Posted by Dessert Survivor at 1:11 PM No comments:

On of the stranger vegetables in my garden is okra, which is sometimes called gumbo.

Okra is native to Africa and it likes hot weather, which is probably why it is much more popular in the south than in the north. This year my early plantings did not germinate--I think the soil was too cold.

Okra has one of the prettiest flowers of any vegetable. I think it could even be grown as a flower. 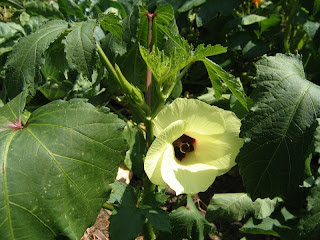 After the flower falls off, the pod develops very quickly and after a few days it is ready to be picked and eaten. If it is not picked soon enough, the pod gets very woody. 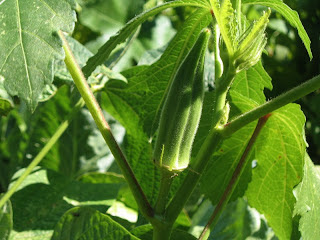 The neatest thing about okra is that it is slimy. Some people find the sliminess offensive--one family member maintains that eating okra is like eating snot. Maybe--I do not remember what eating snot was like, and I am not willing to test that assertion. I do find that eating okra is very funny because it has such an unusual texture. I cannot help but smile every time I eat one. The humor of eating okra, and its funny name, are major reasons that I enjoy this vegetable.

Last year after the frost, I pulled the plants. I found that the sliminess was not confined to the fruit. It seems to pervade the whole plant.

Can I squeeze some economics in here? Maybe it illustrates de gustibus non est disputandum.
Posted by Dessert Survivor at 7:46 PM No comments:

Several economic blogs have discussed a silly faculty letter whining about the establishment of a Milton Friedman Institute at the University of Chicago. In her post on the topic, Megan McArdle points to a really sharp attack on Joseph Stiglitz, one of the big names in economics, that I had not seen before. My favorite bit:

One of my favorite stories from that era is a lunch with you and our former colleague, Carl Shapiro, at which the two of you started discussing whether Paul Volcker merited your vote for a tenured appointment at Princeton. At one point, you turned to me and said, "Ken, you used to work for Volcker at the Fed. Tell me, is he really smart?" I responded something to the effect of "Well, he was arguably the greatest Federal Reserve Chairman of the twentieth century" To which you replied, "But is he smart like us?" I wasn't sure how to take it, since you were looking across at Carl, not me, when you said it.

In a seemingly unrelated article, David Warsh explains why Martin Feldstein had a huge impact on economics in the July 27 issue of his Economic Principles. However, if you think about what Feldstein has accomplished at Harvard, you can see why the U of C may need the Milton Friedman Institute to stay competitive. My impression is that economics at the U of C is living off past glories.

It is fun to read about the major leagues.
Posted by Dessert Survivor at 9:37 AM No comments:

Greg Mankiw links to an article that ranks academic disciplines by their political correctness. How do you think economics ranks, high or low?
http://gregmankiw.blogspot.com/2008/08/cost-of-being-pc.html
Posted by Dessert Survivor at 7:18 PM No comments: