"This was a nasty, vindictive man who laid off workers en masse, bragged about stealing ideas from competitors, belittled his employees with screaming tirades laced with oaths and imprecations, overburdened them with heinous work schedules, cheated his best friends and oldest colleagues when it came time to distribute shares, outsourced everything he could to Chinese factories that employ child labor under dangerous conditions, practiced a cruel Darwinian meritocracy that disdained diversity, lied constantly out of pure habit, sicced the government on his chief business rival, possessed a “Nietzschean attitude that ordinary rules didn’t apply to him”, and even denied paternity of his firstborn child. Then he took credit for the work he practically whipped out of people while posing as a benevolent sage."


Who was this real-life Gordon Gekko? For the answer, see here.
Posted by Dessert Survivor at 4:37 PM No comments:

When I saw this ad for J.D. Wentworth a few days ago, my instantaneous reaction was, "Payday loans for rich people." That certainly is not the reaction that the people who made the ad wanted. An important reason for choosing opera as a way of getting their message out is that opera is considered high-class, and they want to be the association of high-class opera to color people's views of their company.
The service they are offering is the same service as payday loans--to restructure payments. People who use payday loans need money now but do not get paid until later. The same is true of the people whom J.D. Wentworth is targeting, though the payments are over a much longer period of time and are much bigger. Their appeal is to people who have structured payments over time, the sort of payments that lotteries, annuities, and some legal settlements give. If you have a certain income stream of $2000 per month and you want to cash it in, firms like J.G. Wentworth are there to help you out.

(They have a somewhat different ad that still has the music but a different setting.)
Posted by Dessert Survivor at 7:44 AM No comments:

Another Merle Hazard song and video, this one about too big to fail.


An annotated version, much longer, is here.
Posted by Dessert Survivor at 2:41 PM No comments:


The second has better production values.

Posted by Dessert Survivor at 10:44 AM No comments:

The Nobel Prize in Economics was awarded to Thomas Sargent and Christopher Sims. Here is Sargent last year commenting on the 2009 stimulus package"


In early 2009, President Obama’s economic advisers seem to have understated the substantial professional uncertainty and disagreement about the wisdom of implementing a large fiscal stimulus. In early 2009, I recall President Obama as having said that while there was ample disagreement among economists about the appropriate monetary policy and regulatory responses to the financial crisis, there was widespread agreement in favor of a big fiscal stimulus among the vast majority of informed economists. His advisers surely knew that was not an accurate description of the full range of professional opinion. President Obama should have been told that there are respectable reasons for doubting that fiscal stimulus packages promote prosperity, and that there are serious economic researchers who remain unconvinced.


update: Another quote, from a graduation address:


“Everyone responds to incentives, including people you want to help. That is why social safety nets don’t always end up working as intended.”

Posted by Dessert Survivor at 4:28 PM No comments:

From the Bureau of labor Statistics: 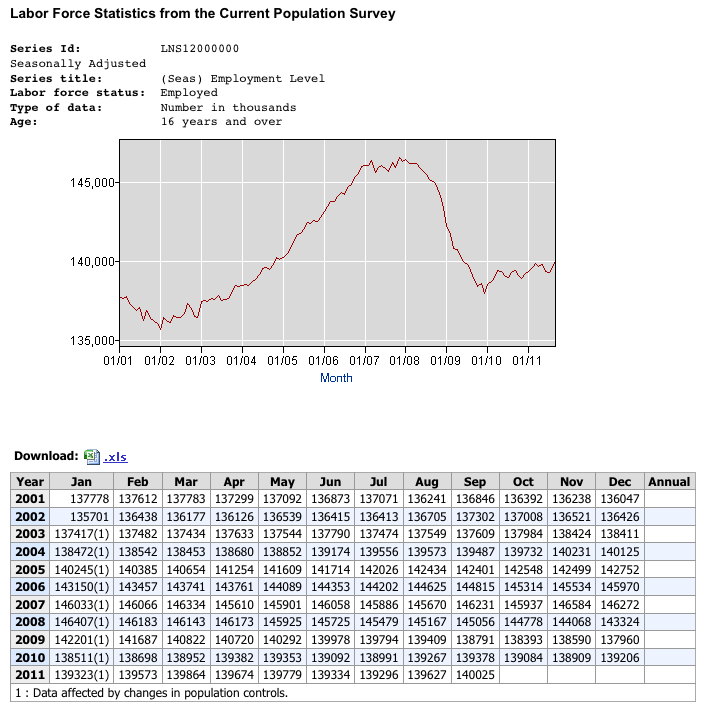 (Click on the graph to see the whole thing.)

The recovery after the 2001 recession has been called the "Jobless Recovery," but job growth then was no worse than what we have seen after the 2007-9 recession.

Posted by Dessert Survivor at 5:07 PM No comments:

The Economic Cycle Research Institute says we are heading for a new recession:

Early last week, ECRI notified clients that the U.S. economy is indeed tipping into a new recession. And there’s nothing that policy makers can do to head it off.
....
Why should ECRI’s recession call be heeded? Perhaps because, as The Economist has noted, we’ve correctly called three recessions without any false alarms in-between.
....
A new recession isn’t simply a statistical event. It’s a vicious cycle that, once started, must run its course.
....
It’s important to understand that recession doesn’t mean a bad economy – we’ve had that for years now. It means an economy that keeps worsening, because it’s locked into a vicious cycle. It means that the jobless rate, already above 9%, will go much higher, and the federal budget deficit, already above a trillion dollars, will soar.

Posted by Dessert Survivor at 4:53 PM No comments:

Found from a link at Division of Labor.

Posted by Dessert Survivor at 7:47 PM No comments: