The first house is now under construction in the new Sunset Ridge subdivision in Rensselaer. The developers began constructing the streets and storm sewers and all the other infrastructure before the bursting of the housing bubble, and for a while there was not much activity. Late in the summer activity again picked up as they paved the roads. Still, given all the reports of how severely depressed new home construction is, I was a bit surprised to see a house under construction here. Several other planned subdivisions have gone nowhere. 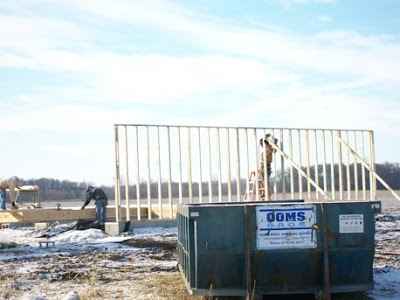 My hands got very cold in just a few minutes as I was taking several pictures. I wonder how much extra people earn for being willing to work under such unpleasant conditions. It seems to me to be a good example of where the concept of compensating differentials should apply.
Posted by Dessert Survivor at 7:05 PM

Steel building kitsoptions exist for both homes and businesses. You can purchase kits for extra storage, sheds, garages, and even metal houses. There are also a lot of commercial and industrial options. You can find kits for airplane hangars, extra storage, larger buildings, and even correctional