College kids do some strange things--or at least they look strange to those of us who are well beyond college age--but sometimes those strange things are part of the romance of college life. This past weekend some students at Saint Joseph's College took part in a competition for a 32-inch television. It was not a contest of strength or quickness, but of endurance and ability to conquer pain and sleepiness.

To stay in the competition, the students had to keep a hand on a school van. There were some scheduled bathroom breaks, but other than that, the contestants just stood next to the van and kept a hand on it. Initially there were either 17 or 19--I got both numbers when I asked how many had started-- but 14 hours into the competition, when I stopped by, only two remained. 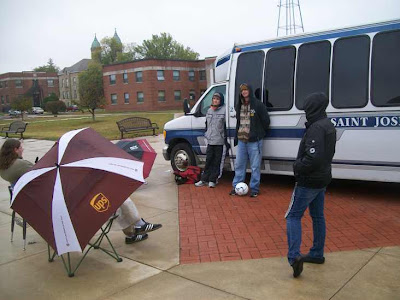 It struck me that this competition seems to be a form of the entrapment game, which is normally explained as a type of auction. In a normal auction, only the winner pays--the losers pay nothing. In the entrapment game, everyone who bids pays whatever they bid whether or not they win the auction. Imagine such an auction for a $20 bill:

Suppose that anyone who bids at the auction of our $20 bill must pay the amount of the bid whether he wins or not. Someone will open the bidding low at $.50 in hopes of getting a real bargain. Someone else will top the bid with a $1 bid. Bidding will usually proceed up to about $10 and then pause. The second bidder must now decide whether to lose his $8 or $9 bid, or continue. If he continues, the bidding will usually advance up to $20 and then pause again. The second highest bidder now realizes that he is not going to gain anything on this auction, but has the potential for a substantial loss, so he has a strong temptation to up his bid beyond $20. Here is how Frank and Cook describe this game:

"One might be tempted to think that any intelligent, well-informed person would know better than to become involved in an auction whose incentives so strongly favor costly escalation. But many of the subjects in these auctions have been experienced business professionals; many others have had formal training in the theory of games and strategic interaction. For example, psychologist Max Bazerman reports that during the past ten years he has earned more than $17,000 by auctioning $20 bills to his MBA students at Northwestern University.... In the course of almost two hundred of his actions, the top two bids never totaled less than $39, and in one instance totaled $407."

Can you see how this competition with the van is similar? There is no payment in money, just time. Some of those who entered probably enjoyed the camaraderie of being in the contest for a few hours before they went home. When you are 14 hours in, it is no longer much fun, and each additional hour probably is more and more unpleasant. All the time that is spent is lost, whether or not you win the contest. The total value of the time spent by all those entered in probably is greater than the value of the prize.

A competition that would be more similar to a regular auction would be to have the television won by a waiting line or queue. If you begin the line and stay there until the deadline, you win. If you leave the queue, someone else can replace you. In this case there would be an incentive to become second in line only if you thought there was a good chance that the person first in line would drop out. The person who would be first in line would tend to be the one who valued the television most in terms of time.

When the price of the item is time rather than money, there is a social loss because no one else gets the money--the time lost by those waiting is not gained by anyone else.

I asked the two guys still standing and the judges about what had happened in the contest. They said that a couple of the people had been eliminated when they got careless. One girl dropped her cell phone and stooped over to pick it up. taking her hand off the van. Another girl had a blanket for warmth, and it slipped. She reached to stabilize it and took her hand off the bus without realizing what she was doing. A few had dropped out in the very early morning, probably because they decided they needed some sleep.

I suppose all those who took part in it will have a story to tell their kids and grandkids about the stupid student stunts that they did when colleges were real places and not just destinations on the Internet.

Update: The contest ended early Saturday afternoon, 18 or 19 hours after it started. The end came not by one of the contestants dropping out, but by an error. One of them was making some changes in his iPod music selections, and then reached down to grab an umbrella, momentarily taking his hand off the bus.

There is always next year.
Posted by Dessert Survivor at 10:39 AM