Getting ready for Thanksgiving

Sarah Palin was back in the news last week because some people were horrified that she gave an interview with turkeys being slaughtered or bled (I could not tell which) in the background. The commentary seemed to divide into two camps: the horrified and those who said that if you eat meat, you should not be afraid to see how that meat gets to your plate.

In our society we have managed to separate ourselves from a lot of unpleasantness that is necessary for life. An attraction of a show like Dirty Jobs is that it reminds us of that fact. Older societies were not so far away from those facts (unless you were very rich, in which case you could say things like, "Let them eat cake"). Primitive man was uncomfortable killing animals for meat, and as a result the whole process was sanitized with religious ritual. The main point of animal sacrifice in the Bible or in the Greek epics was not to waste animals, burning them for the gods or God, but to slaughter them for human consumption.

One of the troubling things about hunting is that some hunters do not seem to be troubled by the taking of life, but rather seem to be quite delighted by it. I have no problem with people hunting for meat. But some have no interest in the meat--they hunt for sport, and I do not respect that, even if their hunting is necessary to preserve a balance given that we have eliminated natural predators (especially wolves).

One of the comments I saw (I do not remember where) was from a farmer pointing out that farming itself centered on killing. He said that nature took care of the growing, and what the farmer spent his time doing was killing the competition: the weeds, the insects, the rodents, and anything else that threatened the crop. If you think of farming in that way, then there really is no escaping animal slaughter even if one becomes a vegan. Not only plants but also animals died for your whole wheat bread, your soybean tofu, and your three-bean salad.

Update. You might think you can avoid the slaughter by going organic. I doubt it. I garden organically, but when I saw the critter in this picture, I killed it. I did not eat it, though I think it is edible. Any gardener who does not kill the insects that feed in the garden will not have much to harvest. 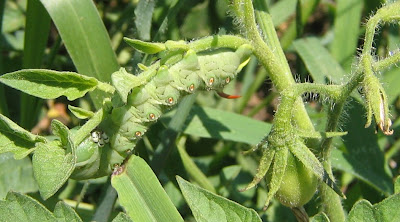 Posted by Dessert Survivor at 6:56 AM

I guess we have a way to go before we achieve some people's goal of living in a sanitized, politically correct world.